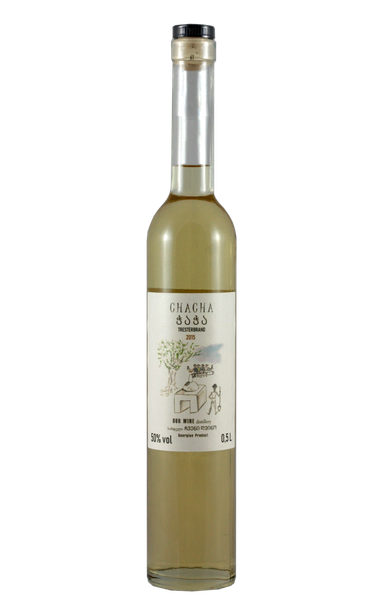 It all started with this chacha: We wanted to drink good liquor in Germany as well and imported a palette of this chachas on the straight. Apparently the right choice. It warms the mouth, enters into every corner of it well-tempered and leaves a feeling of understanding the bigger picture. It has been aged in oak barrels for four years, creating the unique amber color and creating its unmistakable taste profile between quince and caramel.

Soliko Tsaishvili began producing wine at a time when Georgia was still part of the USSR and the wine industry paid little attention to quality or tradition, but only produced in bulk for the Russian market. In 1989 he bought Rkatsiteli grapes from various villages in Kakheti for the first time and processed them as a hobby winemaker in his own cellar in Tbilisi for himself and his friends. Soliko continued to work full-time at the university as a philologist and editor of a literary magazine. In 2003, he finally made a momentous decision: he bought a house in the eastern region of Kakheti, complete with vineyard, and became a winemaker in full-time. On 5,5 hectares in Kardenakhi, he has since grown mainly Saperavi and Rkatsiteli wine.

Three of his friends were there as supporters/co-founders at the time when Luca Gargano, one of the founders of the Italian Slow Food movement, tasted his wine in 2005, bought the entire stock and joined as a fifth partner. This was the birth of "Our Wine" (Georgian "Chveni Ghvino"), a community of winemakers whose aim from the very beginning was to enjoy even better wine in good company, working radically according to biodynamic principles. Together with nine other natural wine growers from the very beginning, Soliko founded the Natural Wine Association. However, as natural wine production in Georgia only accounts for 2% of the total production of all wines so far, they also wanted to build a charming and sustainable bridge to the Georgian public and curious consumers and opened Vino Underground in 2010, a rustic wine bar in a vaulted cellar in the heart of Tbilisi, where the wines of all natural wine growers invite to drink. With this approach, Soliko has become the leading and inspiring figure of today's generation of natural winemakers, showing curious people new taste perspectives that can only be found in Qvevri wine. Many saw and still see in him the guru of the reawakened natural wine movement in Georgia, of course he smiled about such labels only softly into himself: sparing with his words, but overflowing with warmth, proud of his traditions, but open to the world.

In 2016 Soliko fell seriously ill with cancer and two years later finally lost the battle... What remains is the memory of his warm, weather-beaten expression, underscored by his white beard and mischievous smile, which made you feel that he always knew something in himself that he did not reveal. The 2015 vintages of wines and Chachas are the last to bear Solikos signature...

However, his previous partners David Kapanadze and Irakli Pruidze, as well as his friend Merab Matiashvili, also a natural winemaker with his own vineyard in the neighbouring village of Tibaani, decided to let Our Wine live on and, after a year of stagnation, produced wine again in 2017. It is an exciting and worthy task, which the three, curiously enough all of them full-time doctors, have taken on.

You can find more information about Our Wine on the info page www.winesgeorgia.com/site/domaine/prince-makashvili-cellar-our-wine